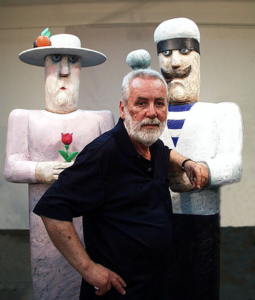 Vasko Lipovac (June 14, 1931 – July 4, 2006) was a Croatian painter, sculptor, printmaker, designer, illustrator andscenographer and one of the most prominent artists of the region.  He is best known for his minimalist figuration and use of intense, unmodulated and often dissonant palette. With the exception of his juvenile period of geometric abstraction, he remained loyal to figuration throughout his whole career. Exceptionally prolific, he worked in various techniques and was equally skilful in using high-polished metal, polychromous wood, enamel, terracotta or polyester to create his sculptures, reliefs and mobiles.

Vasko Lipovac was born on June 14, 1931, in Škaljari, a small coastal settlement near Kotor in Montenegro. He was the youngest of five children in a very harmonious family of a prosperous merchant and a shipping agent Spasoje Lipovac and Antica Lui, the daughter of a respectable landowner Maksimilijan Lui. He attended Real Grammar School in Kotor, where his drawing teacher was Mato Đuranović (1895–1973), the painter who inspired his students with the bright, shiny colors of his works.

After graduating from the secondary school, he moved to Zagreb, Croatia in 1950 and enrolled in the Academy of Applied Arts. He initially chose sculpture, in the class of Kosta Angeli Radovani, but during his second year (1951/1952) he switched to painting, where his mentor became Željko Hegedušić. It is worth mentioning that during this period of the early 1950s, many future prominent artists attended Zagreb Academy of Applied Arts, such as Zlatko Bourek, Jagoda Buić, Ante Sony Jakić, Zvonimir Lončarić, Mladen Pejaković, Ordan Petlevski and Pavao Štalter. After graduation, from 1955 to 1959 he attended the Master’s Workshop of professor Krsto Hegedušić.
This postgraduate study gave many talented young visual artists much needed freedom and opportunity to explore and use their artistic sensibility.

He was intrigued by the idea of integrating art with architecture, and especially integration of art into workspace, so he collaborated with numerous architects. Among his most prominent are the collaborations with Jerko Rošin,

Lipovac had around 100 solo exhibitions and over 200 group, juried, problem, conceptual, and important invitational exhibitions in Croatia as well as abroad. In addition, he received over twenty awards and honours for his sculptures, paintings, graphics, illustrations and public monuments.